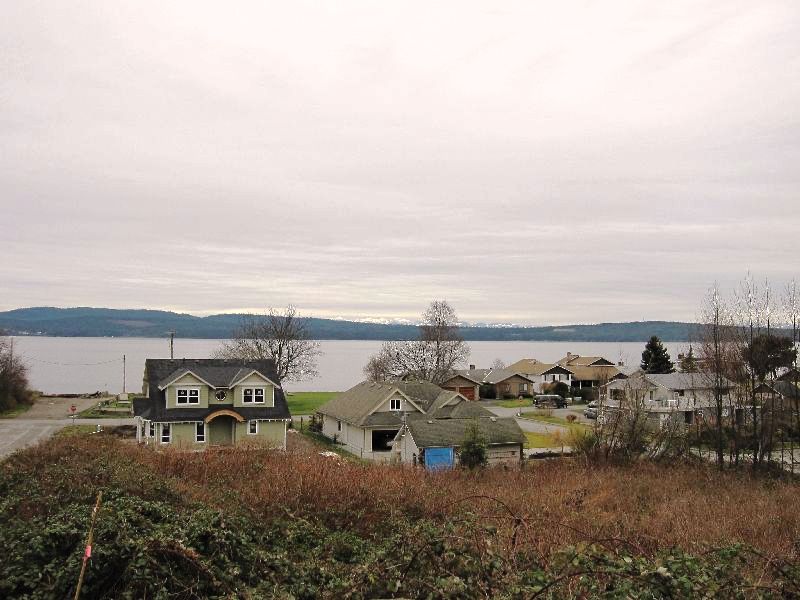 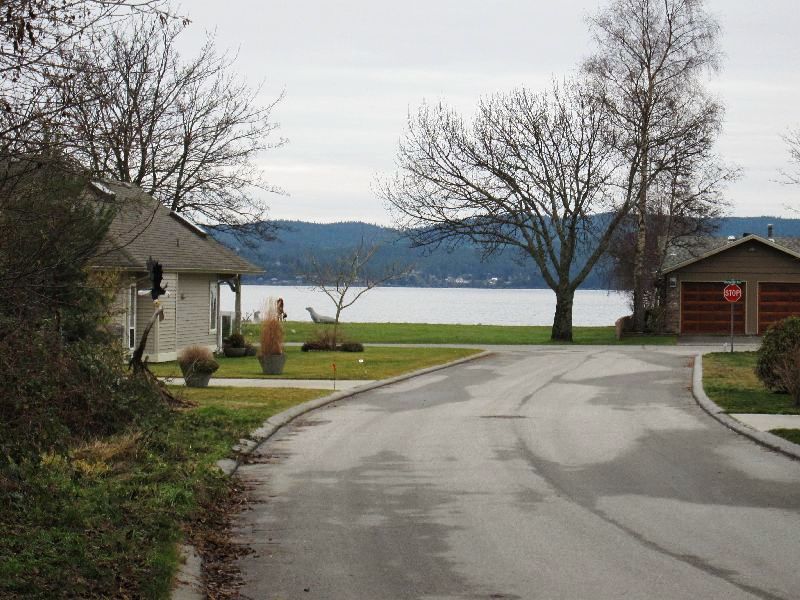 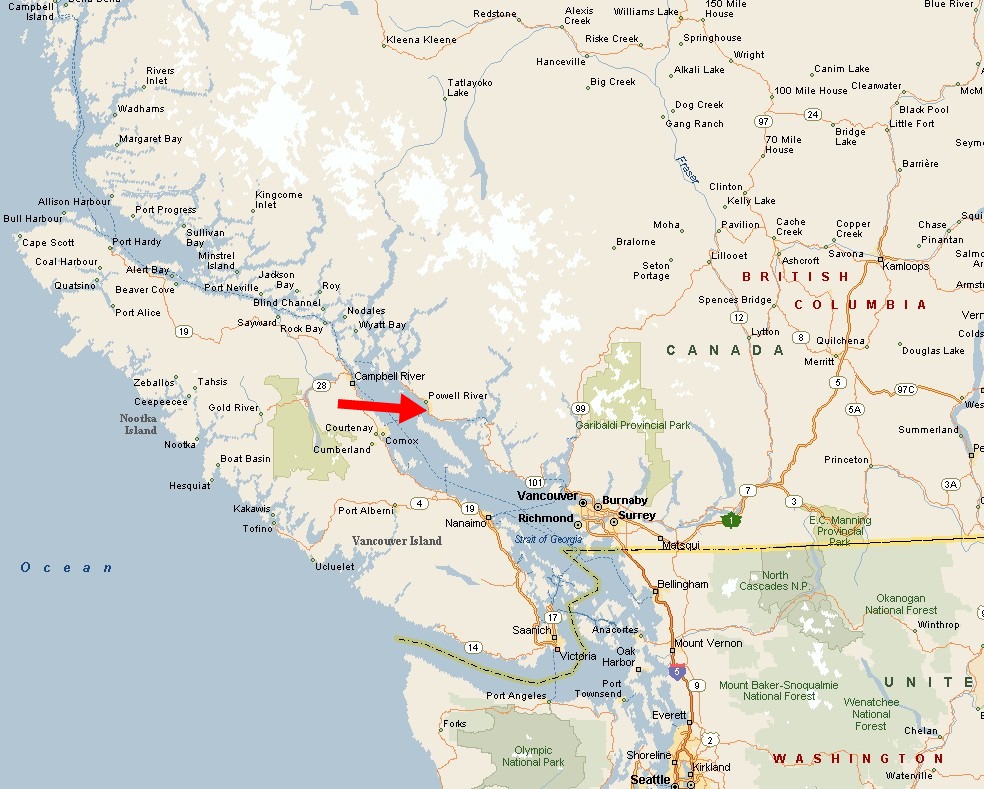 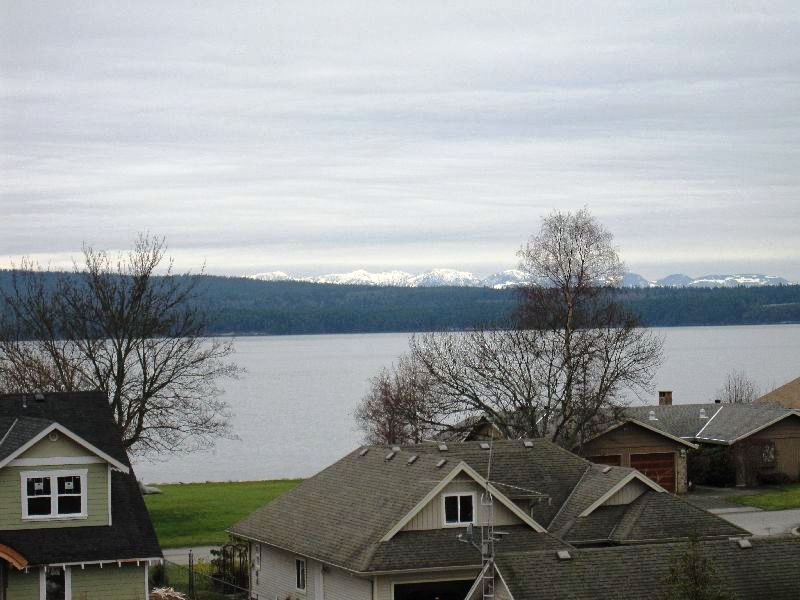 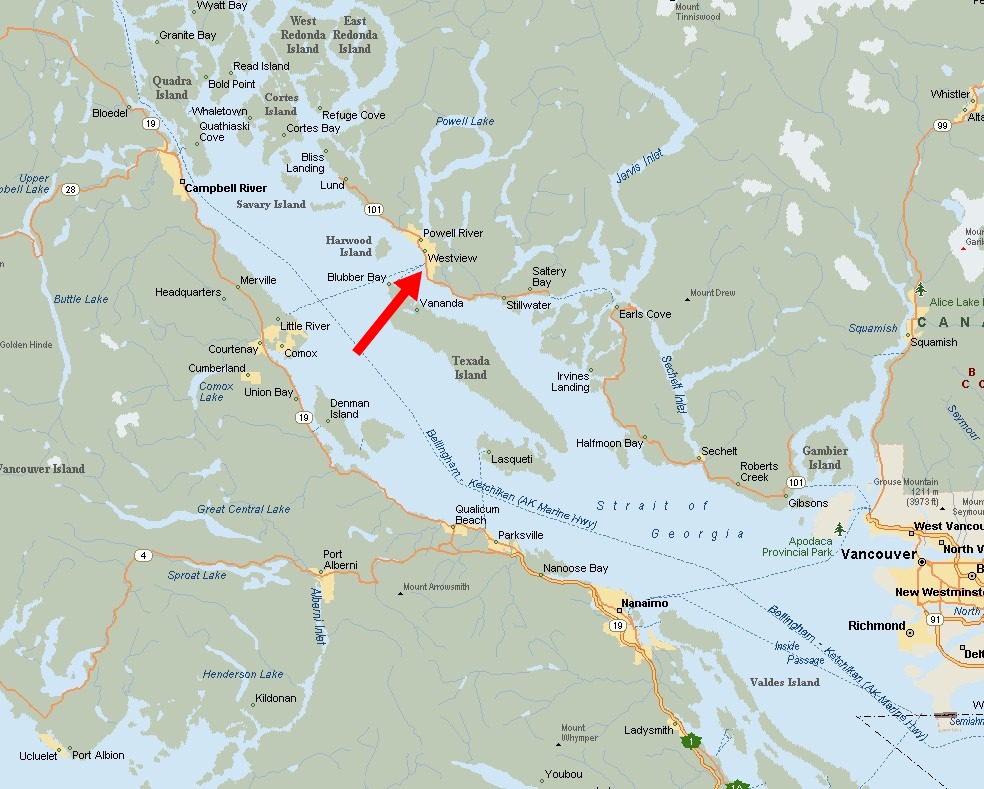 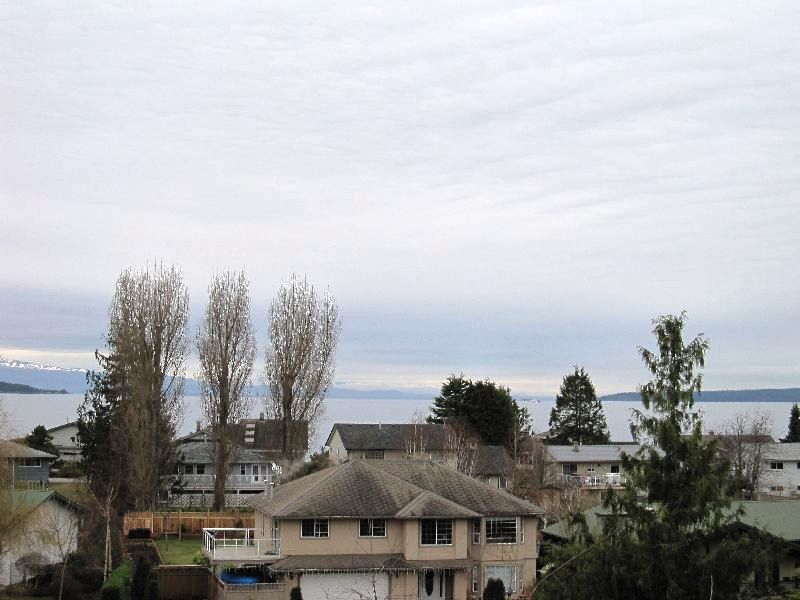 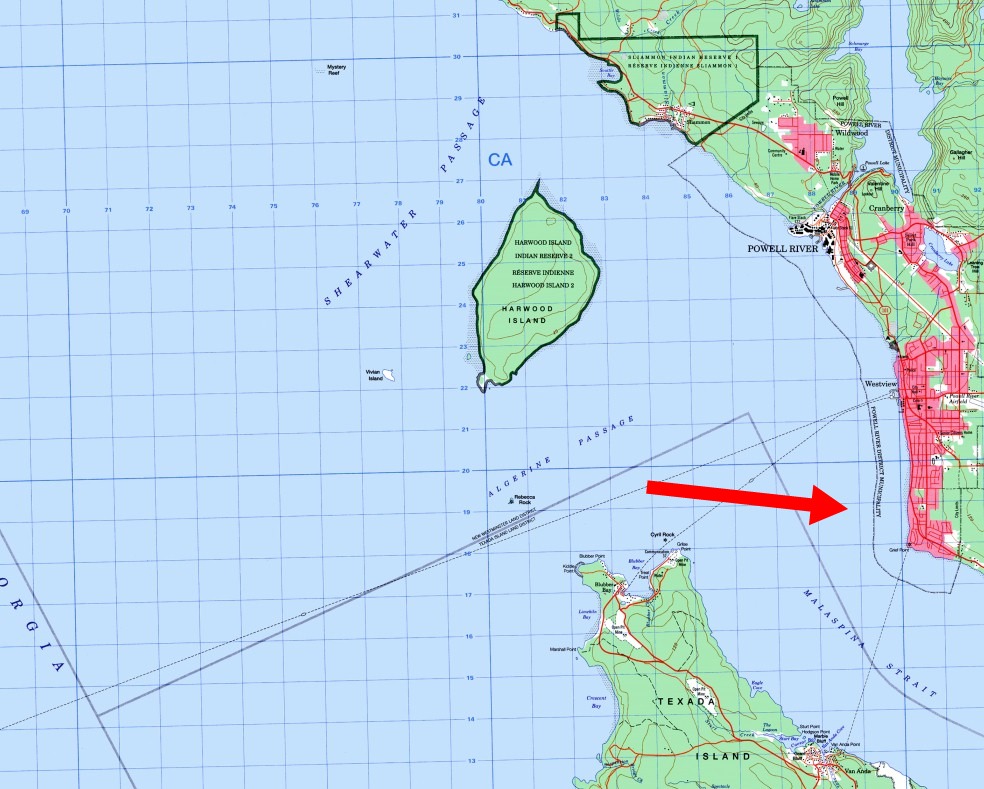 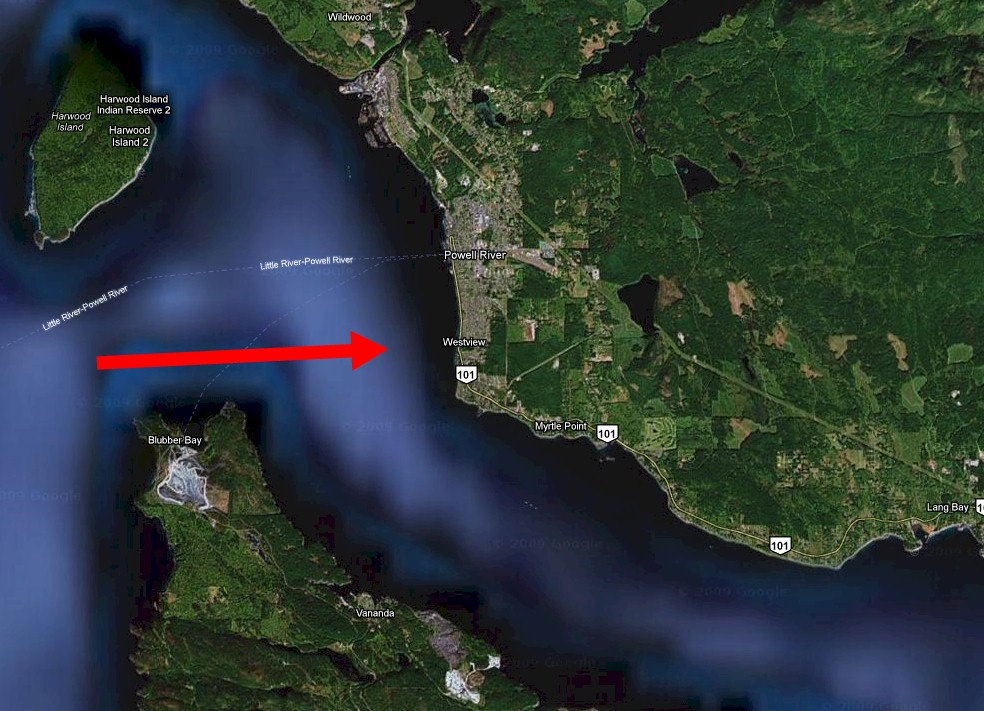 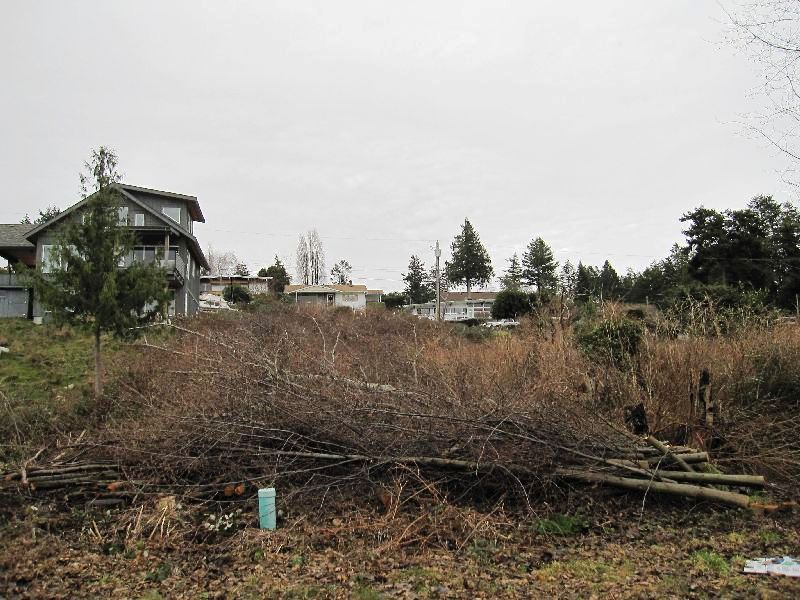 This South facing property offers sweeping oceanviews of Malaspina Strait, Texada Island, Harwood Island and the snowcapped mountains of Vancouver Island. The .23 lot is located in the prestigious Grief Point neighborhood within Powell River municipality and utilities are underground, giving you an unobstructed view. Access to the lot is from both Cortez and Malaspina Avenues which adds to this lot's accessibility. Lot is only 1/2 block from the public beach and Grief Point waterfront park. Boat moorage and seaside dining are three blocks away at Beach Gardens Marina. The property is a good investment/holding property as well as being an ideal location to view the sunsets off of the deck of your dream home. No GST!

Powell River “The Pearl of the Sunshine Coast” boast sweeping ocean views and spectacular sunsets. With a population of 22,000, this friendly seaside town offers ‘big city’ amenities and luxury services without the ‘big city’ parking and traffic hassles.

Named the Cultural Capital of Canada in 2004, Powell River is home to many artists, performers, musicians and writers. Every two years, choirs from around the world arrive in Powell River to participate in Choral Kathaumixw, a four day extravaganza of performances by youth and adult choirs. The Powell River Academy of Music, founded in 1990, has spawned no less than six local choirs, several of which perform and tour internationally. In addition to founding Kathaumixw, the Academy operates the Symphony and Opera Academy of the Pacific, two weeks of master classes and performances which offer aspiring professional musicians an opportunity to train with internationally renowned conductors and musicians.

Festivals and Markets April through October
Powell River’s Open Air Market operates May through October and features locally grown produce and many other delectable local food items such as freshly milled organic flour, baked goods, B.C. cheeses, flowers and a wide array of crafts. Locals and visitors chat over coffee and tea while enjoying home baked goods and other hot-off-the griddle home cooking at the food tent while listening to local musicians performing on the outdoor stage.

Located on the ‘Super Natural’ Sunshine Coast of Southern British Columbia, an area renowned for its year-round temperate climate and stunning scenery. Grief Point is a 2 minute drive South from Downtown Powell River.

5 daily commercial flights from Vancouver International Airport’s South Terminal to Powell River offer 25 minutes of ocean vistas. If you choose to make your way along the spectacular Sunshine Coast by car, it is a four and a half hour trip from downtown Vancouver to Powell River. Please contact Jamie or Jason for complete directions.

Powell River and the Sunshine Coast is year round sea to mountain recreation area. The region services include an 18 hole championship golf course, lawn bowling green, curling rink, a 16 lane Bowling alley, tennis courts, an all weather 400 meter track, as well as many baseball, fast ball, softball and soccer fields.

Miles of hiking trails lead to beautiful lookouts, waterfalls, or peaceful lakes which can be viewed along the 180 km Sunshine Coast Trail and numerous recreational areas can be reached by logging roads, owned by the logging companies. Boating and sports fishing are ardently pursued as all season sports. Marinas and Government docks are available to residents and visitors.

Powell River is known as the “HOT SPOT” for winter diving in North America. The “Mermaid” at Mermaid Cove in Saltery Bay Provincial Park is an extra special attraction. The area also has some of the largest Wolf eel and Octopus in the world. Canoeing may also be enjoyed on the quiet lakes of Powell River or you can take in the Powell Forest Canoe Route Circuit. Ocean canoeing and kayaking is very popular in Jervis Inlet, the Copeland Islands Marine Park, the Malaspina Inlet with Okeover Arm, and Desolation Sound. For all the nature lovers and sightseers, Powell River has many parks, viewpoints and beaches to explore, and the hiking club will help you take advantage of the many beautiful trails. Bird watching is also unprecedented.

Golf Year Round
For those who love to golf year round, the Sunshine Coast is the place to be. The 18-hole, par 72 Myrtle Point Golf Course and Clubhouse is just a 15 minute drive north of Paradise Cove Estates. Located in the foothills of the Coast Mountains, this Les Furber-designed course offers four sets of tees for all levels of ability. A fully stocked pro-shop, driving range, putting green and Canadian Professional Golfers’ Association pros ensure a first class golfing experience. Golf cart rentals are available, plus shower-equipped locker rooms. After the game, enjoy a meal at the Orca Bar and Grill. Additionally, there are two a nine-hole courses, Nootka Dunes, and just north of Powell River, Glenrosa.

The 106 miles (170 kilometer) Sunshine Coast Trail accommodates everyone from day hikers to ultra-marathoners. Easy to get to with more than twenty access points along the way, hikers are rewarded with abundant wildlife, gorgeous lookout points and stunning westerly views of the Strait of Georgia and its emerald islands. The trail is extremely well maintained and hikers can take advantage of camping facilities and lodging located along the route.

There are numerous biking routes well suited to beginner, intermediate and advanced off-road riders. Once again, the Visitor’s Centre is the place to go for detailed maps and trail descriptions.

Prior to the establishment of any settlement in the area, the area was inhabited by Coast Salish peoples, and was used as a landing spot for gold prospectors coming from Vancouver Island who where treading their way to the Fraser River to find quick fortune prior to the creation of the Cariboo Road.

The river was named for Israel Wood Powell, who was at that time superintendent of Indian Affairs for BC. He was travelling up the coast of BC in the 1880s and the river and lake were named in his honour.

The pulp mill was started in 1908, with a corresponding townsite company town commenced in 1910: the first roll of paper was produced in 1912. Similarly, large logging companies had earlier moved in to take advantage of the huge timber. Brooks, Scanlon & Obrien; Bloedel, Stewart and Welch; and Theodosia Logging were but a few logging companies, with the Brooks brothers and M.J. Scanlon forming the Powell River Company, western Canada's first pulp and paper mill. The Historic Townsite was designated a National Historic District by Parks and Monuments Canada in 1995, recognizing the exceptionally well preserved early 20th Century planned community, rooted firmly in the Garden City Design Movement and the Arts and Crafts philosophy.

When the British Columbia Credit Unions Act was passed in 1939, a study club organized by local millworkers secured the first charter with a deposit of $48.30. The mill provided a small office space at very low rent in the early years. By 1955, when Powell River Credit Union(now 'First Credit Union') moved into a permanent office, it had over 3,000 members and $1 million in assets.

The mill in Powell River was at one time the largest pulp and paper mill in the world. In its prime, one in every 25 newspapers in the world was printed on paper from the Powell River mill. However, since then it has significantly cut back on production and now produces newsprint and specialty papers for Catalyst Paper. The mill is down-sizing, and only 3 paper machines (#9, #10 and #11) remain in production, thus laying off hundreds of employees. The subsequent diversification of the local economy led to an increased focus on ecotourism and the arts, in addition to more traditional resources like mining, fishing, and general forestry. In recognition of its strong arts & cultural programs, Powell River was named a "Cultural Capital of Canada" in 2004.

The population of the Powell River Regional District is (2001 Census) 19,765. Of this 12,983 live in the City of Powell River. Although these numbers have remained static since the 1970s, recent (2006) figures indicate that the regional population is showing signs of renewed growth, and may have reached 22,000.

The Powell River area is the traditional home to the Tla'Amin nation of the Coast Salish people, who still reside there to this day in their traditional village of Sliammon.