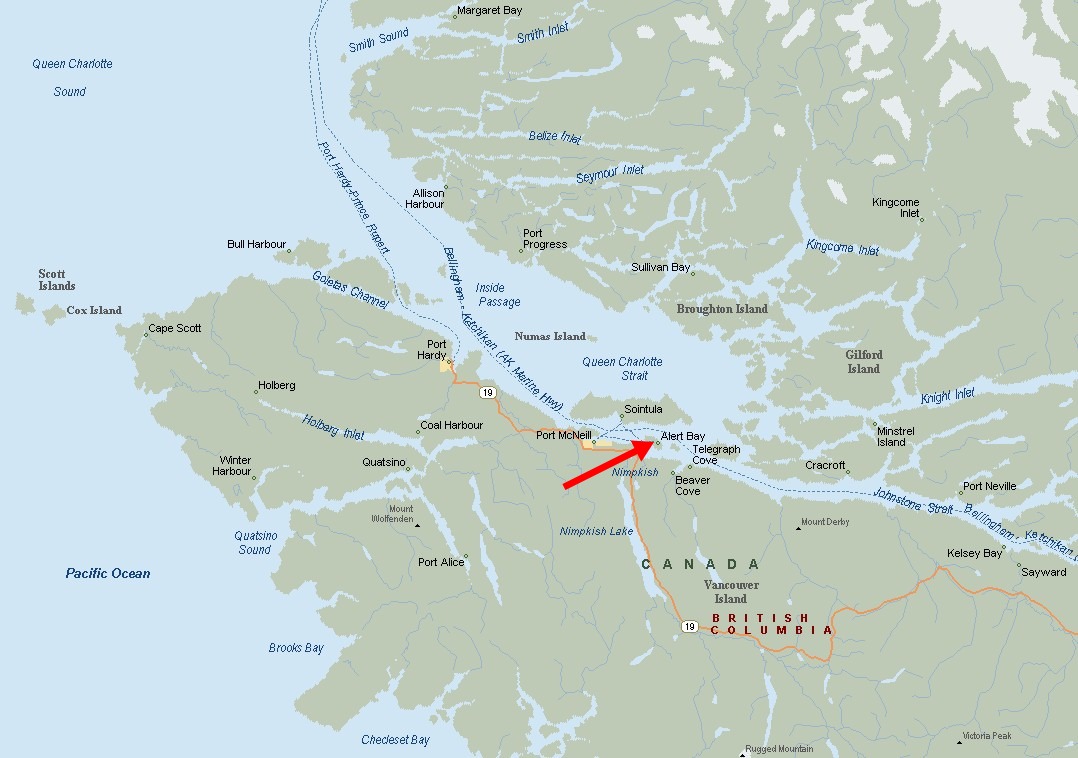 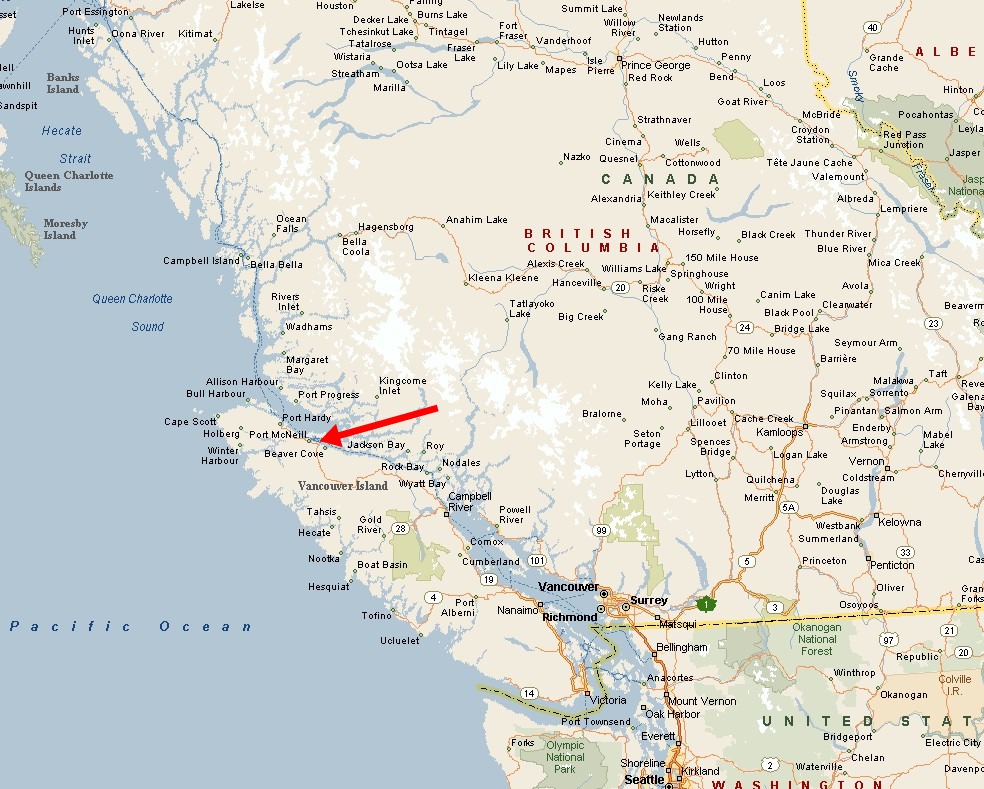 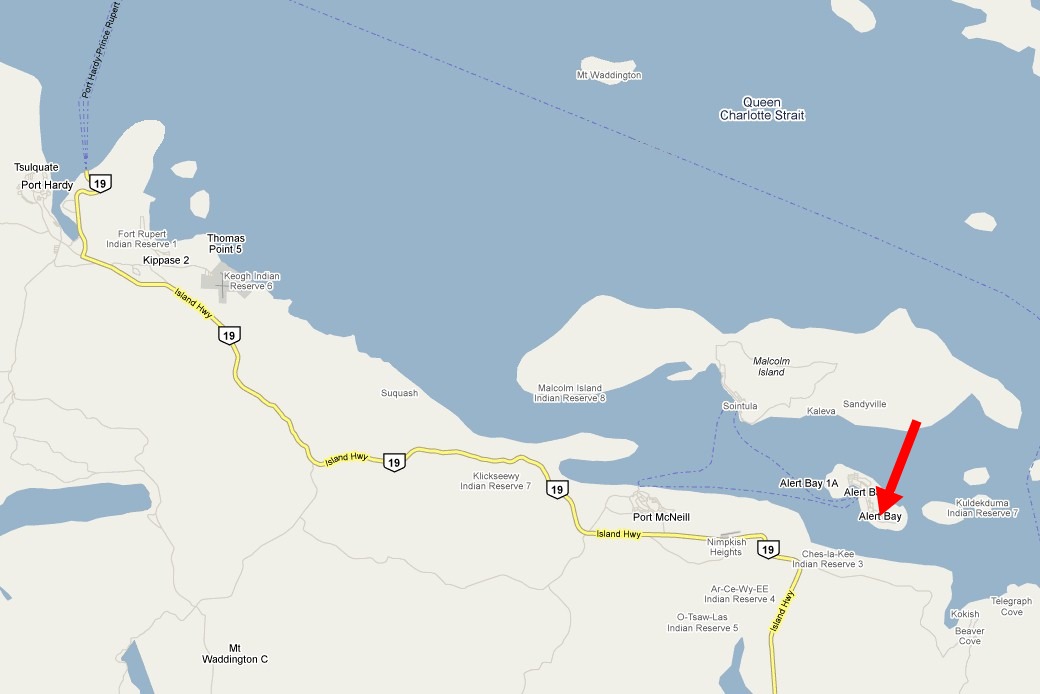 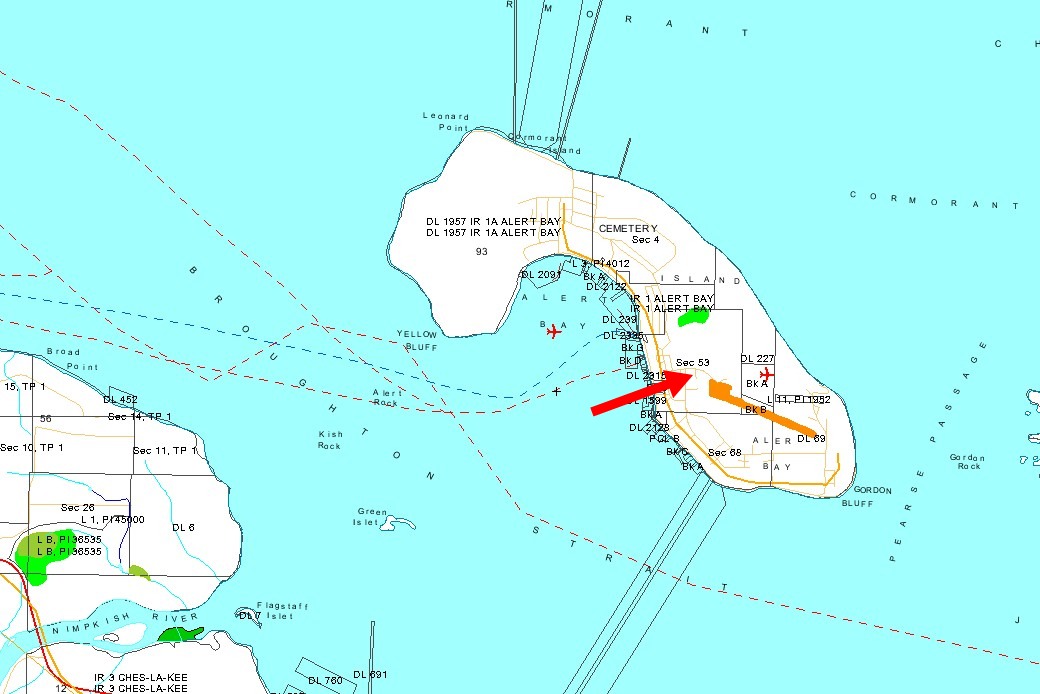 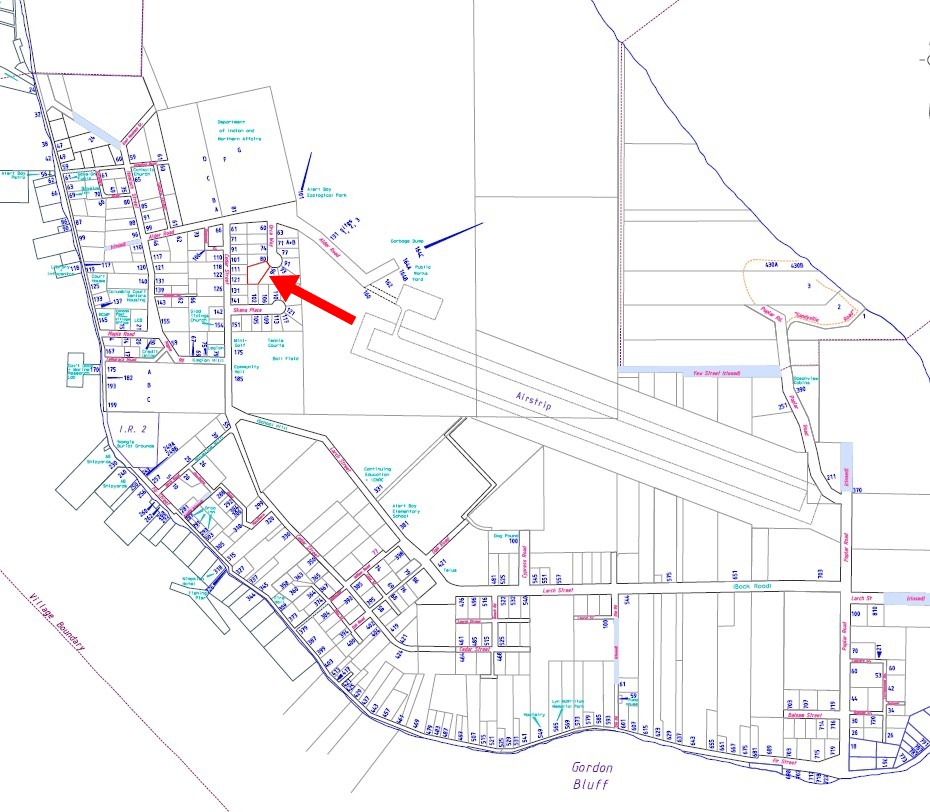 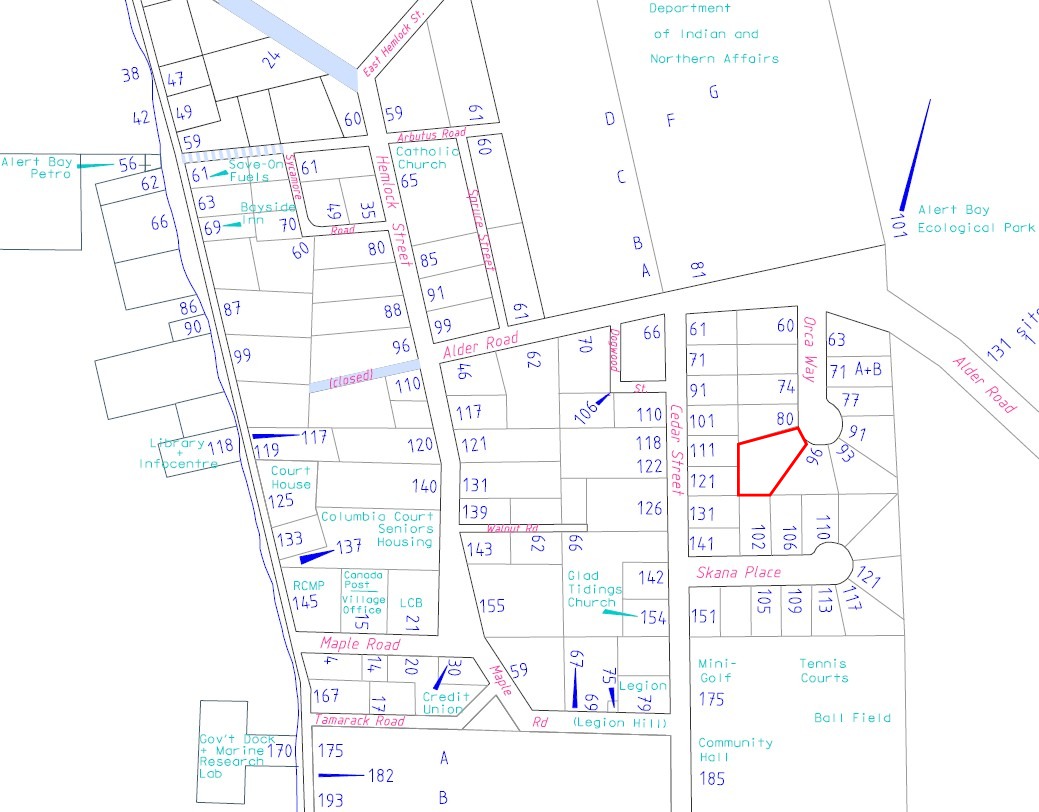 Affordable village lot with unobstructed ocean view. Located at the end of the cul-de-sac and minutes to the ocean and all other services within Alert Bay.

Cormorant Island is located off the northeast coast of Vancouver Island, easily accessible by a scenic ferry ride from the community of Port McNeill on Vancouver Island to the island's busy harbour at Alert Bay.

The village of Alert Bay often referred to as “Home of the Killer Whale”, the village is located at the top of Johnstone Strait on Cormorant Island, a crescent shaped island three miles in length and a half mile wide. It is the oldest community on northern Vancouver Island.

Today, Alert Bay has a population of about 1,500 comprised of the Village of Alert Bay, the 'Namgis First Nation and Whe-la-la-u and Area Council. The island is accessible by a 30 minute ferry ride which departs six times as day from Port McNeill.

Broughton Archipelago Marine Park: To the northeast of Cormorant Island across the Labouchere Passage is the Broughton Archipelago Marine Park, a wilderness area consisting of a maze of several small islands, numerous inlets and adjacent foreshore at the southern extremity of Queen Charlotte Strait, off the west coast of Gilford Island. The islands in the marine park are undeveloped and are largely undiscovered. Facilities are limited to a day-use recreation. The numerous remote, solitary islands incorporated in the park provide unlimited and unique fishing and swimming opportunities, and are fabulous for exploring by kayak.

Orcas: Close to Alert Bay in Johnstone Strait is the largest concentration of Killer whales in the world at Robson Bight Ecological Reserve, where up to 200 Orcas arrive each summer to rub on gravel beaches at the mouth of the Tsitika River. Whale watching companies based in Alert Bay, Port McNeill, Sointula, Telegraph Cove, Sayward and Port Hardy all operate tours to Robson Bight.

Fishing: Blackfish Sound east of Cormorant Island is productive for salmon fishing, offering feeder chinooks throughout the year. The first migratory chinooks appear in late May through to August, followed by the sockeye (June to August), pinks (July to August), coho in mid July, northern coho in September and chum salmon from late August through to October. Winter chinook end off the year by passing through toward the end of December. Halibut fishing commences in April to June, and continues through the summer to September - open water depths of 200 to 400 feet are most productive. Concentrate on Richards Channel, Ripple Passage and Bolivar Passage. Halibut around the 100 lb mark are brought in regularly, with monsters of over 200 lbs caught occasionally.

Island Hopping: Travelling between the Southern Gulf Islands and Northern Gulf Islands can be accomplished in small hops. Each of these islands is a world unto itself, each with its own history, culture and colourful characters - each island deserves at least a day or two for exploring. Immediately north of Cormorant Island across Cormorant Channel is Malcolm Island, location of the small, picturesque fishing village of Sointula.

Knight Inlet: Located about a two-hour boat ride south of Alert Bay, Knight Inlet is a fjord that juts 105 kilometers deep into the wilderness of the British Columbia mainland. As one of the largest fjords on the B.C. coast, Knight Inlet offers its visitors spectacular scenery amidst steep cliffs that fall away to the deep blues and greens of the glacial-fed water. Silence reigns here, broken only by the slap of the water against the shore and the thunder of nearby waterfalls, intermingled with the cries of seabirds.

This area is home to one of the largest concentrations of grizzly bears in British Columbia. Starting in late April the bears return to the estuary from hibernation and start the year off feeding on the sedges, succulents, grasses and barnacles that abound in the estuaries. This luxuriant spring growth provides the basic nutritional needs for the bears and draws them from the mountains down to the estuary. From mid August to late September, as the salmon return to the river, it is not uncommon for up to 50 bears to be seen within five miles along the shoreline. Grizzly bear watching excursions can be arranged at Alert Bay Lodge.

Cormorant Island off the northeast coast of Vancouver Island is the traditional home of the 'Namgis First Nation. They used the island as a place to bring their people who had passed on, and also lived on the Island on a seasonal basis for several thousand years.

Cormorant Island boasts the North Island's oldest community, the fishing village of Alert Bay, which was an important trading centre for early residents in the area.

It is now about 190 years since Captain George Vancouver anchored his vessel, the H.M.S. Discover, at the mouth of the Nimpkish River. While Captain Vancouver visited with the inhabitants of Cheslakee's village, the island, now known as Cormorant Island, lay uninhabited just a short distance away. In 1846 the island was named for a coastal cruiser, the H.M.S. Cormorant, and later, about 1858, the Bay was named for the H.M.S. Alert which was then stationed on the North-West coast.

As their business grew, Spencer and Huson became aware of a need to establish a permanent work force on the Island. To this end the partners approached a Reverend James Hall, a missionary of the Church Missionary Society, who had just established a mission at Fort Rupert in 1877. They persuaded the Reverend to relocate to Alert Bay and in 1878 a mission house was built to school the native boys and girls.

Water transportation has always been an important ingredient of Alert Bay's history. In 1896, the Union Steamship "Comox", made its first regular call while en route to Rivers Inlet lying to the north. Many other ships, representing a variety of purposes ranging from the transportation of goods, to the delivery of tourists, have visited the Island over the years. In more recent years, when the community was at its peak as centre of the region, regular access was provided by ferry from Kelsey Bay via Beaver Cove. Regular ferry service is now provided from Port McNeill with direct runs to the Bay interspersed by trips to neighboring Malcolm Island.

By the early 1900's, Alert Bay was a well established and thriving community serving as the major centre to an area of abundant resources. 1902 saw British Columbia Packers Association purchase the cannery from its founders and in 1909 St. George's Hospital was opened.

The present countenance of the Alert Bay community reflects much of its past history. Visitors to the area will be fascinated by the mixing and contrasting of the cultures, the native art forms represented by their carvings, paintings and metal drafting. Artifacts and events of the past, not represented by the buildings of the village or the reservation, can be viewed in the community's attractive museum.

Above all, a casual stroll from one end of the community to the other, instills one with an appreciation for the efforts of the early pioneers who carved themselves a place to live and work and created the roots of the village which now exists on the temperate south shore of Cormorant Island.